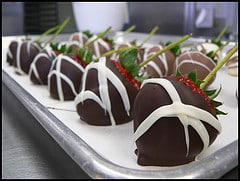 Specialty foods, whether gourmet, organic or all natural are the rage these days. Formerly available only through farmers’ markets or specialty foods stores, premium fares have gained far-reaching acceptance.  Consumers only have to go to the local chain grocery and drug store to find their daily fix. The market for gourmet foods and beverages is currently valued at over $42 billion and is expected to exceed $62 billion by 2009.1 Americans might not need premium treats, but we surely want them and want them daily.

Concerned with the high saturated fat and sugar content for decades, consumers have set aside premium chocolates for the most special occasions.  Recent research has revealed the potential health benefits of chocolate to the public.  More and more people are embracing chocolates, some are even incorporating higher-quality treats into their daily routines.  As a result, the premium chocolate market grew at an annual rate of 10.5% during the period between 2001 and 2005 compared to a paltry 1.8% of the overall chocolate candy sales.2 Premium chocolate is far and away the most exciting category in the confectionery segment.

Starbucks started it all.  Thanks to the Seattle coffee maker’s success, the whole consumable goods industry has been redefined.  The masses, enthralled with better-quality treats, have become accustomed to spending an extra $2 or $3 everyday on luxury options.  Premium chocolate, a loosely applied classification for chocolate that cost $8 or more per pound, appears to be the next big thing.  No longer saving it for special occasions, more and more people engage in a daily “chocolate break”; a moment reserved for sheer indulgence over a delicious bar. As a result, the segment is growing at an amazing rate.  Sales through all channels increased 126% from 2001 to 2006 and the premium chocolate market value exceeded $2 billion in 2006 and is slated to hit $3.5 billion in 2011.1

Valentine premium chocolate gift giving is growing, with customers spending the most on items priced between $7-10

Premium chocolate is an acquired taste. This is especially true in the case of the dark chocolate sub-segment that differentiates itself with less sugary, more bitter flavors than conventional confectionary fares. As such, children or teens do not represent the primary market for this category. 3 A blessing in disguise is the fact that the gourmet chocolate market stays strong despite the dwindling percentage of U.S. households with children, which threatens the sales prospects of the sugar confections industry as a whole.4

Among the adult population, surveys show some overlapping with the general gourmet food industry.5 A few consumer groups stand out: young adults (18-34 years old), the affluent (with household earnings of at least $100,000), women, and Asians.1 However, differences between segments are often small.  Indulgences have become dear to the old and the young, low-and-high-income earners alike. Like most things that were once limited to only the wealthiest customers, premium chocolates have gone mainstream.

With margins tightening elsewhere in the confectionery segment, top-flight chocolates have become an increasingly important part of manufacturers’ portfolios.5 As such, more and more mainstream marketers seek to move up-market, either through launching their own premium lines or by acquiring small, yet established producers. Their presence, albeit still in the minority, can only lead to an even more dynamic and exciting industry.

The market as a whole has seen great strides in distribution reach. Once exclusively available at specialty & boutique shops, premium chocolate now generates 40% of total sales through food, drug, and mass channels.15 A large part of the expansion is due to the mainstream player’s existing retail network and advertising muscle.  One cannot ignore the exceptional branding and marketing done by others to make gourmet chocolate the ever-emerging phenomenon it is today.

As newly-released data indicates the level of concerns about serving foods that contain sugar to be the highest since 1994.  The once-labeled “health fad” is not going away anytime soon.6 Hence consumption of chocolate, a product high in both fat and sugar, can hardly be considered guilt-free.  Manufacturers have reacted by creating added value in the form of vitamins and healthy ingredients. The Hershey Company unveiled Whole Bean Chocolate which contains 7 grams of fiber in each serving.7 This product is a part of the company’s antioxidants-rich Goodness Chocolate portfolio, meant to be enjoyed in moderation as part of an active and healthy lifestyle.

Rising health concerns have led to the emergence of another gourmet segment, quipped by insiders as “the dark side of chocolate”.  Dark chocolate, which has high flavanoids content, saw its 2006 sales volume jump 43%.3 Also, as their palates evolve and deem sugary taste less desirable, consumers actively seek to “trade up” toward even darker chocolate.  Indeed, the percent of cocoa content has become increasingly important to customers both as a measure of taste and of health benefits. Companies listened and started rolling out products with more than 70% cocoa. In 2005, Lindt introduced a 99% cocoa bar to the delight of chocolate connoisseurs around the world.9

In comparison, milk chocolate features as little as 10 percent cocoa, and its milk content has been shown to dilute potential health benefits of antioxidants.10 Yet, consumers have not turned their backs on milk chocolate.  Recent consumer research by Mintel uncovered an indifference between milk and dark among premium chocolate lovers.1 For all the positive press heaved upon dark chocolate, there might be a big untapped market where companies would gain from positioning their milk chocolates as premium.

The world of chocolate has witnessed many other exciting trends.  Thanks to the ever growing organic foods craze, consumers’ awareness has increased.  Chocolatiers are becoming more ethically concerned about how and where certain goods are made.  Single bean, or origin chocolate, and Fair Trade-certified bars have developed quite a following.  Artisan chocolates, with their exclusive hand-crafted products, limited versions and endless flavor experiments have their own appeal.

Commercially produced chocolate has its root in Western Europe countries: Belgium, Switzerland, France, etc.12 Despite being in the world’s largest confectionery market, U.S. consumers possess a somewhat less refined taste.  As such, it is vital for companies to actively engage in “recruiting” chocolate lovers.  Guerrilla-type sampling programs and tasting classes work wonders in unveiling chocolate’s positive attributes to the public.1 In fact, many high-end chocolate gift boxes now come with instructional leaflets containing tasting notes and tips such as “Place your tongue on the roof of your mouth and swirl the melting chocolate all over.”  Readily available recipes and chocolate-related information, such as those on Lindt’s website, are also effective educating tools.  Mars launched a series of Ethel’s Chocolate Lounges where customers can learn firsthand about the finer points of chocolate indulgence while getting their daily fixes.14

Positioning itself in the premium category, gourmet chocolate would benefit from constant product differentiation. Labeling that plays up cocoa content, country of origin and health-related hints would go a long way toward achieving this goal.  Chocolate is often an impulse purchase; hence displays, product placements and feature tie-ins can be a key sales driving factor.  Also, for a premium market, gourmet chocolate lovers are a rather price-conscious crowd.  Hershey’s Cacao Reserve’s disappointing launch is believed to have stemmed from the company’s refusal to compete on prices and hold temporary discounts.16