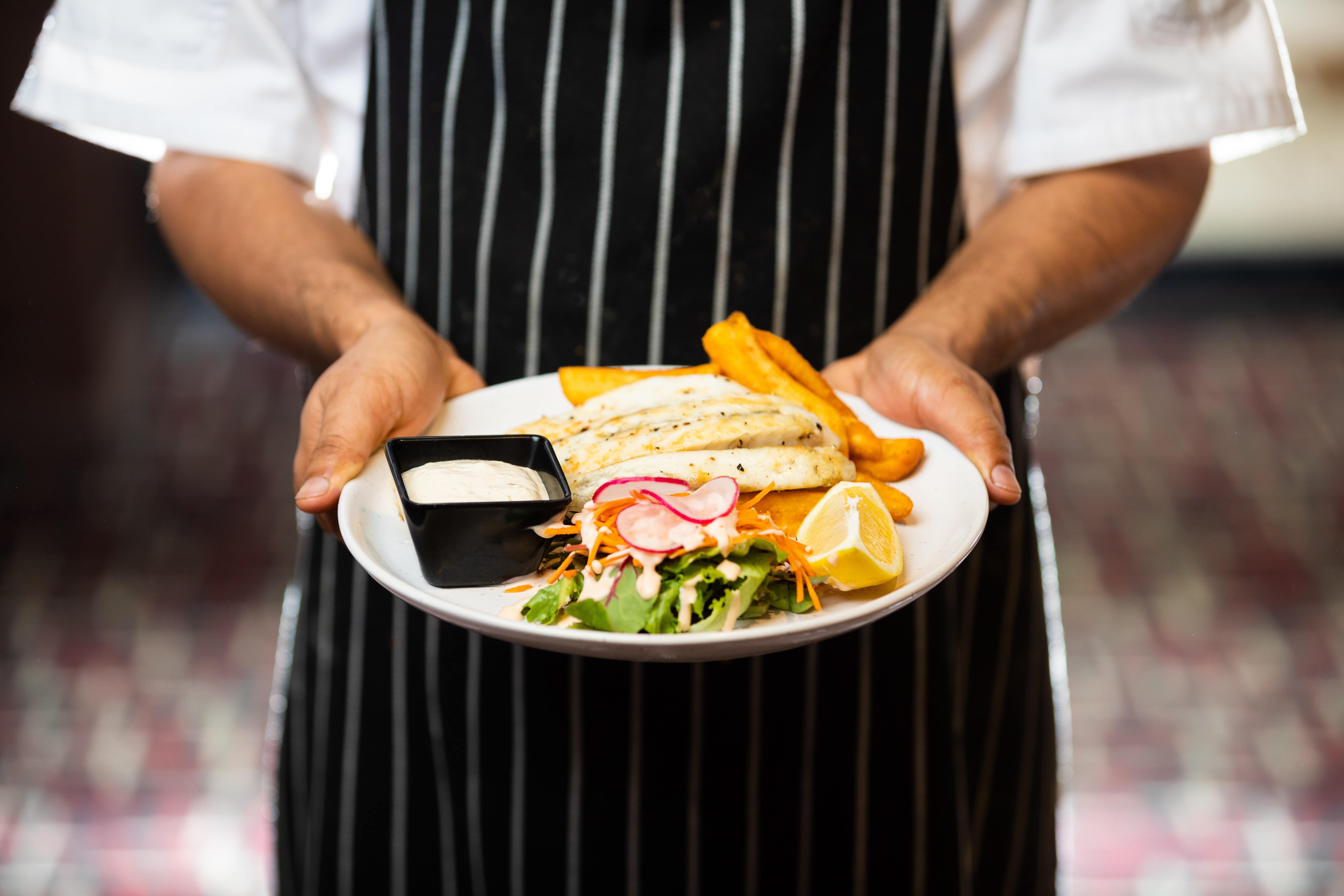 Hey, who’s cooking dinner? Not as many of you as you might think. More and more Americans are looking elsewhere. Two up and coming trends are hiring a personal chef and purchasing freshly prepared complete meals needing only to be re-heated. One thing needs to be clarified: a personal chef and a private chef are different professions. The private chef lives on the property and is responsible for all meals and snacks for everyone. A personal chef typically works in your home once every 10 days, preparing the meals and refrigerating or freezing them. Dual income families, baby boomers, and overworked single parents all find the personal chef beneficial The personal chef does not just cook. As a small business owner they are responsible for all aspects of the business from the day to day hands on tasks to the marketing and accounting. The freedom to determine the workload and scheduling differs drastically from that of working for a restaurant. The industry associations report annual revenues in the hundreds of millions of dollars annually With 29% (2005) of consumers reporting they will be increasing their purchases of prepared foods, there is a corresponding increase in the demand for healthy, exotic, and ethnic foods. From fast-food to gourmet shops companies are fighting for this section of the market.

In today’s world of running 24/7, preparing dinner is a job that a lot of people have decided to turn over to someone else. Entrepreneur.com ranked personal chef as the 4th fastest growing home based profession in 2004 and the popularity has not declined. The demand for upscale prepared food is on the rise.

Third Wave Research determined that this industry’s target market can be identified by annual food expenditure levels and the most likely candidates would be:

In the September 8, 2006 edition of the St. Louis Post-Dispatch (Missouri), Rebecca Roussell wrote that the personal chef industry revenues have reached $100 million with projections of $150 million within 5 years. The total number of chefs is hard to determine as most estimates are based on membership in different culinary associations and organizations.

Candy Wallace, executive director of the Personal Chef Association reports that there were 9,000 personal chefs in the field in 2004 with anticipated growth projection of 25,000 by 2009. The estimated customer base is 72,000. Brent Frei, Director of Marketing for the American Culinary Federation, believes this is the fastest growing segment in the culinary field.

The attraction to this culinary field is the independence that it offers. Many personal chefs previously worked in the restaurant business as Chef James Davis said about the restaurant business: “the hours were long and the stress high.” The personal chefs determine how many clients they will be working for and what services they will offer. Some chefs will also prepare meals for special occasions and parties. The chef is responsible for the grocery shopping prior to their arrival at the client’s home, use their own tools and equipment and ultimately package the meals for refrigeration or freezing. The process usually takes around 8 hours. Personal chefs must be in tune with the eating habits of their client(s) respecting the diversity of culinary choices. Many wish to experiment with different food styles from around the world and the Personal Chef Network notes significant increased interest in vegetarian and organic cuisine over the last few years.

In the April 18, 2005 edition of BusinessWeek, the author of “Come Home To Your Own Chef” reports that a “five for four”- four portions of five entrees and side dishes — will cost between $350 and $400.

With business booming, some ambitious chefs are taking the industry in a new direction. Chefs James Davis and his son Bryan decided to expand both the operation and the customer base. Moving into a commercial kitchen gave them the capability to include pre-packaged meal delivery service, increasing their income by 50-60% over the previous year.

Benefits of the Profession

The main benefit of starting a personal chef business is the low start up cost. Roussell reports an average initial start up expense of $2,000. This covers equipment, pots and pans, and uniforms. The cost of advertising and marketing will vary from chef to chef, with geographic location playing a part.

There are several organizations that support personal chefs in a small business venture. Membership dues and services provided vary. At the annual USPCA conference, members exchange business ideas. Topics include getting started, marketing, and networking.

Personal chefs must market themselves. They are selling their services, ability, and personality. How does a client choose a personal chef? The first step is to surpass the client’s expectations. It is the small things that grab the client’s attention, be it preparing a little something extra or placing flowers on the table. The reward will outweigh the cost practically every time.

Networking is important in every career. Get involved with culinary organizations, charity groups, and business organizations. The Chamber of Commerce is a great place to start. Use the relationship that has been established with a present client to expand your market to their friends and family. Offering free sample meals to potential clients as well as expressions of appreciation for referrals are strongly recommended.   Spend the money it takes to have a business card made. It exemplifies professionalism. Have a prospective client critique your performance. Make it easy and non-threatening for him/her to express themselves honestly, perhaps by using a questionnaire

If time is a factor, and a personal chef is not in your budget, there is an alternative. The prepared food industry is attracting many new consumers. There are many players in the business and they are quite diverse. They include health clubs, specialty stores/restaurants, and grocery store chains.

According to the Institute for Food Technology, a non-profit culinary organization, reported that consumers are increasing the consumption of prepared foods by 29%. Healthy alternatives are a must and some people are turning to full service restaurants. Traditional fast-food restaurants like McDonalds and Subway are offering salads, fruit, and yogurt.

East Bank in Chicago decided to focus on prepared food realizing that both members and non-members needed help managing their time. They offer a diverse menu to accommodate all customers, the sales were brisk. The menu includes the expected health meals like salmon, vegetarian, and low fat offerings.  However, the old fashion cheeseburger remained a top seller. A quick check on their website shows that the availability continues.

Many people are looking for more than a “to go” order from a restaurant chain. Dallas’ City Café recognized the consumers need and filled it. The owner rented the space next to the restaurant and City Café to Go was established. The glass cases are filled with grilled salmon, beef tenderloin, asparagus and numerous other gourmet entrees and side dishes. The customers range from CEO’s to frantic mothers in need of a healthy prepared meal.

Grocery stores of all shapes and sizes are involved in the expanding prepared food market.

The holiday season is a booming time for such businesses. For many consumers the day of spending hours at the grocery store, followed by a day in the kitchen is over. The Food Market Institute reported that 94% of grocers sell prepared foods of some sort. In 2006, Ohio’s Kroger stores saw a 10% increase in sales of the traditional turkey dinner. The cost for an average size family was $39.99. Whole Foods offered a vast array of holiday packages ranging from the traditional turkey dinner to rack of lamb.  The hopes of many of the grocers are that if the consumer enjoys the holiday meal, they will purchase future prepared meals from them.

In reviewing Whole Foods sales, a Chicago based research company reported $5.61 billion in sales during the 2006 fiscal year. Four hundred fifty million dollars was generated from their prepared food division. The increase in demand for both organic and natural foods has helped the company’s sales increase.

Kroger,   the nation’s 4th grocer, saw the addition of a more expanded prepared food department as an economic advancement. The typical grocers’ overall profit margin is 1.5 % whereas the prepared food division approximates 3%.

Texas-based H.E.B., the state’s largest privately owned supermarket chain and the 10th largest in the country opened H.E.B. Central Market. Much more than a grocery store, it is a self proclaimed “foodie destination” with an estimated 25,000 visitors a week. Central Market’s first store was in Austin, Texas and that is where the “Café on the Run” concept was born. David Sonzogni director of foodservice for the 8-units division says the chefs are very sensitive to the needs of the community, with ethnic foods being a big seller. Food is prepared in an open kitchen. Sonzogni is excited about the fact that the line between grocer and fine-dinning restaurant is becoming blurred for H.E.B. customers. To keep the foodies coming back the chefs typically roll out 200 new menu items a year while maintaining the customers’ favorites.

Fuddruckers founder Phil Romano created a grocery store geared for the “affluent, time stressed. Texas based” EatZi’s is much more than a market and bakery. Unlike traditional grocery stores which might devote 20-30% of their operation to prepared foods, Etui’s concentrates 70% of its focus on prepared food. It employees a crew of chefs that are comparable to any highly ranked restaurant around. The menu is eclectic drawing from Asian, Southwestern, and even good old fashion comfort foods.  Customers can purchase ready to serve meals or the heat-and-serve version. EatZi’s researchers determined that 35% of their business is from the “affluent” – household incomes above $57,000. Another 35% were under 32 years old. The younger group found they could eat healthily and at a price that was reasonable.  Customers can pick up meals ranging from quick deli sandwiches to multi-course offerings.

Knowing the growing availability of prepared foods for the adult market Matt Cohen (owner of Kidfresh) asked, what about the kids? Kidfresh located on the Upper East Side of New York is a kid’s delight. It features a special entrance with shopping carts just for kids. The brightly colored store specializes in prepared foods just for kids. A color code system divides the foods by age group. Cohen does not believe in using preservatives and he uses organic products whenever available. There are both cold and ready to heat entrées. According to the SDRS The Lifestyle Market Analyst 2006, the following cities have the highest percentage of residents that consume “fine foods”,

Become a Caterer or a Personal Chef – https://www.fabjob.com/caterer.asp?affiliate=796

Photo by Peter Dawn on Unsplash