Aspiring meat processors beware: a handful of select brands dominate the pre-packaged jerky and meat snacks industry.  In 2007, according to Information Resources, Inc., the four top-selling labels comprised approximately 87% of jerky and 97% of dried meat snack sales in supermarkets and drugstores.  This pattern of consolidation is expected to continue, as retailers increasingly deny products from smaller vendors.i
Predictably, many of the same brands possess the strongest distribution relationships with convenience stores.  A 2009 Convenience Store Decisions Brand Preference surveyed key personnel throughout 87 convenience store chains.  Among those surveyed, Jack Link’s, Slim Jim, and Pemmican were perceived as the strongest-performing brands.ii 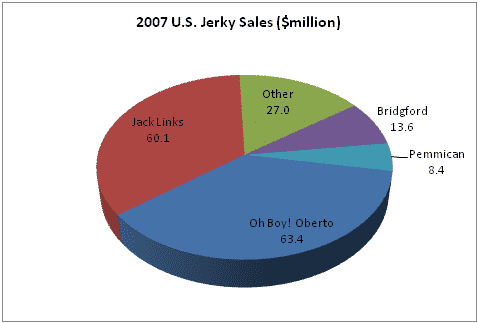 The industry’s path to high market concentration, however, has encountered obstacles along the way.  Oberto Sausage Co., an industry mammoth in supermarkets, has struggled to extend its presence into convenience stores.  The company recently filed a lawsuit against Frito Lay, alleging that the Pepsi Co. subsidiary has not fully performed its duties outlined in a 1999 distribution deal.  “In recent years Oberto’s sales first stagnated and, more recently, have declined while those of its competitors have dramatically increased,” reads the suit, docketed in April 2009.  Specifically, Oberto claims that Frito Lay has only placed the former’s products in 40% of corner stores; meanwhile, competitors’ products occupy 90% of    convenience stores, the most prominent retailer of jerky products.iii
Furthermore, Oberto and other jerky makers will soon incur additional barriers to satisfactory sales in convenience outlets.  Corner stores have begun experimenting with private-label brands, as supermarkets have done in recent years.  For example, Dallas-based 7-Eleven Inc. has developed 180 store-brand grocery items to be debuted in 2009.  As of November 2008, the retail chain had already placed 32 items, including beef jerky, in stores under the 7-Select moniker.  President Joe DePinto cited the recession, encouraging product tests, and past private-label success as reasons driving the strategic decision.iv

In addition to difficulties associated with product distribution, jerky-makers must also navigate complex regulations in order to introduce their product to market.  Notably, the Environmental Protection Agency requires food processors to contend with its industry-specific effluent and solid waste guidelines.v The United States Department of Agriculture enforces laws concerning meat products; jurisdiction includes, but is not limited to, food safety, distribution, and labeling.  Moreover, compliance is required at the state and local levels.vi

Pre-packaged goods aside, the entrepreneurial jerky maker still has options to profit from the meat snack market.  As an artisan jerky maker, the aspiring entrepreneur can craft distinct flavors and textures not currently captured in convenience stores and supermarkets.  The Tacoma News Tribune recently profiled their local artisan jerky scene, a vast scope of snacking experiences.

Seasonings range from the distinctly sweet, such as apple and maple, to more subtle flavors, such as coriander seeds and tamari.  These uniquely created meats allow the artisan jerky maker an immense opportunity to carve a market niche.  For instance, Thai cuisine features pork jerky, often eaten with rice, and Mexican fare includes carne seca.vii

The traditional jerky consumer, as captured by Nielsen Consumer Panel purchase data, is a man between the ages of 35 and 54, who works in a blue-collar profession and earns between $50,000 and $70,000 annually.  Additionally, Nielsen Consumer Panel data indicates that meat snack purchases ring more frequently in the western United States and among households with children between the ages of 6 and 17.viii
Leading manufacturer Oberto’s recent marketing campaigns reflects an appeal to some of these demographic characteristics.  “Text-Taunt-Win” and “Get Into the Ultimate Alpha Zone” allowed customers the opportunity to win sweepstakes gifts such as a Wii console, a Home Depot gift card, an iPod Touch, and an air hockey table.  Ryan Post, senior brand manager at Oberto, explained the marketing strategy, summing up their core consumer as a Gen-X male.  “[He] is very much a trendsetter,” continued Post, portraying the core customer as buying “beef jerky at convenience stores and [eating] it in his car at three o’clock in the afternoon. He’s busy. He’s on his iPhone or Blackberry.” ix 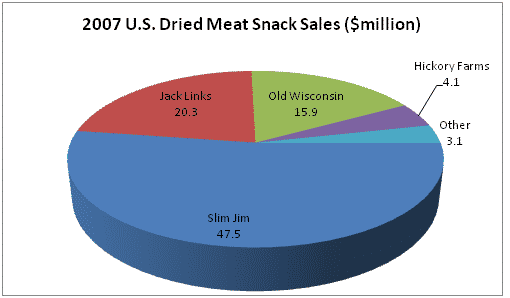 Recent trends in nutritional value, however, are expanding the population base wishing to gnaw on a hunk of jerky.  A study conducted at Penn State University surveyed physically active women about calorie-controlled snacking.  The study participants, between the ages of 18 and 45, typically considered Jack Link’s jerky as more convenient and satisfying than tortilla chips.x

To their credit, Jack Link’s has been very active to both offer healthy snacks and communicate the nutritional merit of their products.  The brand includes certified organic jerky, as well as 50-calorie portion-controlled snacks.  To convey the health value of each of their products, the company helped create the “Smart Snack” designation to highlight nutritional features, including levels of protein, fat, carbs, trans fats, and calories.xi

These recent advancements in jerky products- lower caloric content and organic options- are also accompanied by a broader offering of textures and flavors.  Old Trapper Smoked Products has developed softer and chewier products to appeal to a younger demographic.  The strategy has proven successful, yielding an annual 20% sales growth over the past three years.  Meanwhile, Slim Jim has launched a line of spicy meat snacks; flavors include Tabasco, Chili, and Sweet n’ Spicy.  Jack Link’s have developed Asian influenced jerky, including a Sweet and Spicy Thai flavor.xii

While the American consumer mass is newly experiencing such forays into new seasonings, artisan shops around the country have long offered snacks in a vast array of flavor choices.  Chinese and Vietnamese communities in Los Angeles, for instance, house noticeable numbers of artisan jerky stores.  Future jerky trends can be anticipated to originate from such shops, which not only offer spicy flavors in beef jerky, but also chicken, pork, and yellowfish.xiii Other product influences can be expected from the Kentucky jerky scene, featuring Kentucky-inspired bourbon barbecue jerky, as well as snacks from elk, buffalo, tuna and alligator.xiv

The Future of Jerky

E. M. “Manny” Rosenthal Meat Science and Technology Center, located at Texas A&M University, has utilized its laboratory resources to develop its own perfected brand of jerky.  Profiled in the New York Times, the Rosenthal Center takes lean muscle from the beef round as its product base.  After being sliced with the grain, the cuts are marinated in salty brine for several days and then smoked over hickory.  Far superior to reconstituted jerky found in convenience stores, Rosenthal’s end product has earned the center the praise of being in the “jerky vanguard.” xv
Even more exciting than advancements at Texas A&M, Kansas State University researchers have established and tested a process to combat E. coli O157:H7 and Salmonella.  The project, conducted with funding through U.S. Department of Agriculture’s Food Safety and Inspection Service, examined purposefully infected meat in the University’s commercial smokehouse.

The researchers surveyed small-scale producers to determine current pathogen reduction processes and concluded that, under a worse-case scenario, extra drying time is necessary to meet FSIS standards.  The project provides a simple solution to smaller jerky producers, a declining segment of the industry due to increasingly strict regulatory guidelines.  “We hope that our research has provided a process for small processors that produce safe beef jerky without creating an extra burden,” Kelly Getty explained as the impetus behind the endeavor. xvi

Photo by Edi Libedinsky on Unsplash